Hey @dellams can you try to get WLS2? If so, please use it and see if you can achieve the same end. https://docs.microsoft.com/en-us/windows/wsl/wsl2-install
A few of our core devs have tried it.

Issue: use makeWrapper for hc so that it has a version of cargo to work with

Hi. When trying to generate a zome, I get a message saying I should install Rust. I copied the Linux command from https://rustup.rs/ and got an error message. See below. (The instructions with “nix-env…” were saying that that would install Rust…) [vagrant@nixos:/vagrant/my_first_app]$ hc generate zomes/my_zome This command requires the cargo command, which is part of the Rust toolchain. Generating a Rust based Zome depends on having Rust installed. As a first step, get Rust installed by usi…

Thanks for getting back to me.

I am giving WSL ago now, but it looks my windows build is not high enough for WSL2 but I will give that ago anyway, if not I will still try WSL1 if that still works?

Regarding makeWrapper, how do I use that? What is the syntax, etc? Thanks

@dellams makeWrapper is something that needs to be rolled into holonix itself, basically it sets up a mini nix shell (that would contain cargo) for hc when it is installed by nix-env

WSL1 can be used but there is some extra config see the discussion here https://docs.holochain.love/docs/install/

I got Linux Ubuntu v18.04 LTS working in Windows using WLS but now I got new errors. 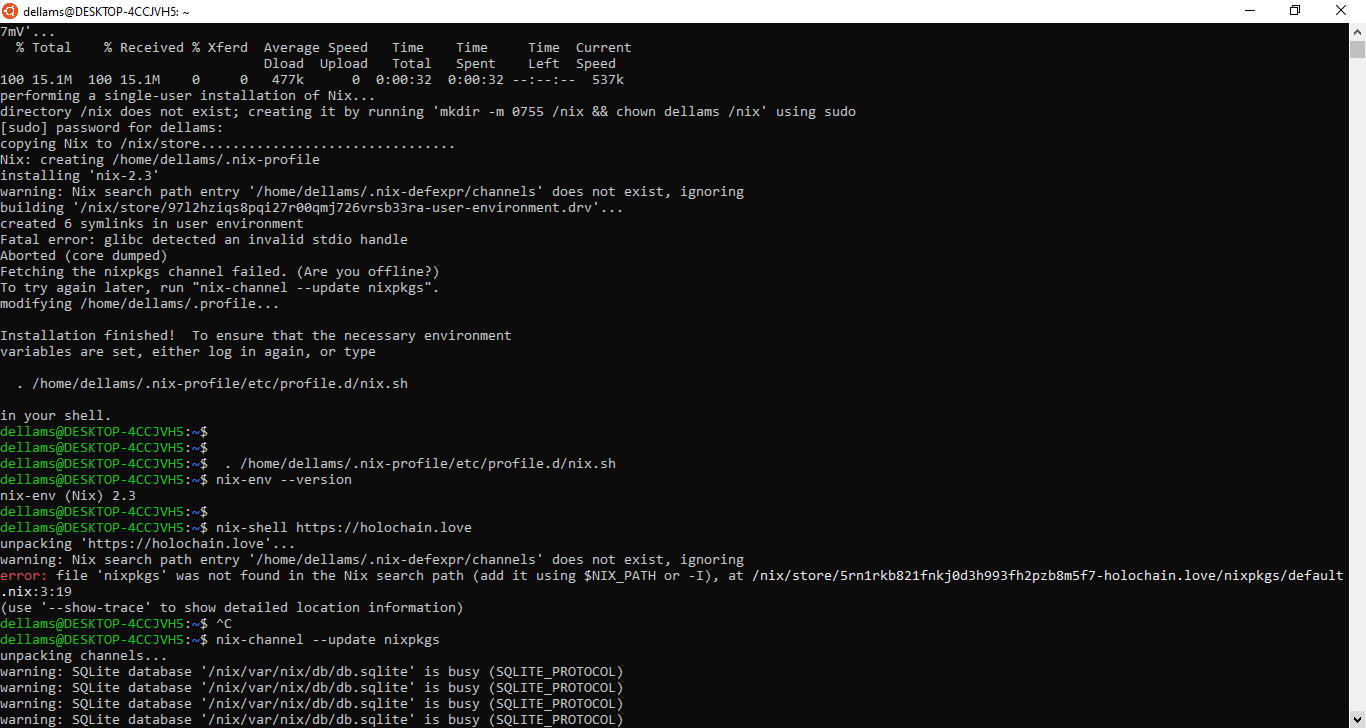 I tried to upgrade to WSL2 but my version of Windows doesn’t support it so it’s looking like I will need to dual boot a full Ubuntu install unless you can see what is causing the errors above?

Is this related to the /etc/nix/nix.conf file you mention that needs editing?

If so how do I edit it from my bash terminal? Sorry I have very little experience with Linux coming from a Windows and .NET background…

@dellams so! i just release holonix v0.0.31 which includes the makeWrapper which should mean that hc includes all its dependencies when installed by nix-env

should be enough to take effect

i haven’t seen it working in WSL 1 myself (i managed to get WSL 2 working), but my understanding is yes you do need to set the config for it to work there

see the discussion here: I'm spinning up some docs for holonix, feedback welcome :)

Still have the “Cannot write: No space left on device” problem. I am tying out Holochain on Fedora running on a Qubes-OS computer, this time

I do see that this has very low priority and maybe I could try build from source, need to get Holochain running on a Raspberry Pi also, so learning to build is necessary!

@tggraner obvious question but is it out of space?

No, I allocated >32GB. I think I need to take a deep dive into the holochain system to figure out how to make it work on Qubes OS, in a way that take advantage of Qubes OS security features. This will take awhile…

@tggraner any luck with Qubes? i’ve never tried it myself

No, but the problem might be using Debian 10 or Fedora 29 when developing Holochain applications not Qubes or Xen (the hypervisor). Does anyone use anything else than Mac OS or Ubuntu?

I am installing holochain for the first time using vagrant.

When I get to the step
nix-shell https://holochain.love

I am also finding that vagrant up fails periodically but has run successfully. The error

Stdout from the command:

Stderr from the command:

Is there a docker-compose based install? My enthusiasm for Holochain is waning. I do all my prototyping on docker and have no great fondness for VirtualBox.

we do all our CI testing on docker so you can see the circle ci config for more examples and the docker/* folder for dockerfiles https://github.com/holochain/holonix/tree/develop/docker

Hey guys I’m just jumping back into the hc community after being working flat out building a new prototype to secure funding, which I’m happy to say is in its way at long last!

Were the windows issues resolved now? I saw on a recent dev pulse that a new update to windows included WSL 2 so the issues with NIX should now be resolved?

Should indeed work with WSL2! I’ve asked a couple people to test it out for me, and they’ve had perfect success.

Yes I can confirm this, I am all setup now on both Windows and Linux ready for devcamp… be good to see you all again…

I am currently making good progress on the .NET HDK and I am about to reach out to the community for some help with this… I have found a way to compile .NET code to WASM and I am also using the Wasmer lib to call into the HC Core API in the Conductor WASM.

I just created a thread for this here:

I am currently making good progress on the .NET HDK and I am about to reach out to the community for some help with this… I have found a way to compile .NET code to WASM and I am also using the Wasmer lib to call into the HC Core API in the Conductor WASM. I am very happy they decided to switch to this because I found some .NET bindings for this here: Issue is, although this lets me call into WASM functions from .NET and also allows WASM functions to invoke .NET methods, there doesn’t seem t…

Would really appreciate your input bro, because I know you were giving me some good advice before and you also have a .NET background… thanks

Is there a way I can get my hc (zomes, etc) out of the Nix shell and into Windows file system? I need to be able to access this somehow? Hopefully there is a way?

You can map “\wsl$” to a network drive to get access to the virtual Linux installs you have. For example to get to my HOME dir in my virtual Ubuntu it is:

The hash will be different depending on which version of holochain.love you have downloaded.

Hope this is of help to people…