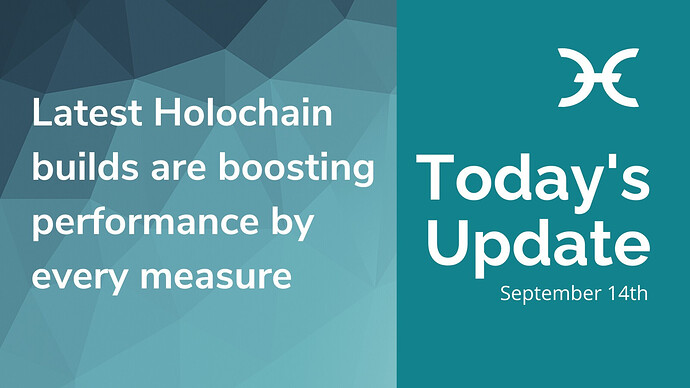 image1600×900 165 KB
.
As you may know from our prior messaging, Holochain was upgraded to use SQLite as its internal database and we implemented the majority of the features related to the RRDHT networking patent. Those updates, however, were still in their infancy. The Holo and Holochain dev teams have since been going through testing and optimisation feedback cycles to ensure this new version of Holochain is as performant as the previous version built with the LMDB database.

This week we passed a threshold.

Holochain’s latest builds are better performant by EVERY measure compared to the older version. That means that the hosted version of Elemental Chat that we have been testing in pre-release can soon be bumped up and made more widely available. It also means that many Holo development activities including updates to the way we register HoloPorts, as well as new feature development in HoloFuel can proceed. We will share more details about all that later this week and next week.

So let’s talk briefly about how the new and old versions compare:

Faster performance is present despite testing with 5 to 7 times as many nodes or end-users on each HoloPort. Our tests are also conservative because the testing framework is what is currently limiting what we can evaluate. All of these results are before we introduce true sharding and before we optimise other features of Holochain - so this will get better and better.