Coming off the announcement of our patent recently, we have seen incredible growth in our community and in the media mentions for Holo and Holochain in the past few weeks. One way you can see the growth is in this aggregation of just the Holo Followers. Yesterday, more than 800 people gathered in our Holochain Meetup and this morning, nearly 300 attended the livestream Build It event.

In Holochain news , optimised proxy code has now been integrated with the rest of our networking code and is being tested, we found and are fixing a bug it caused in network metric tracking.

Our PKI (Public Key Infrastructure) application work has yielded the most sophisticated validation code we’ve yet seen in a Holochain app. To support it we’ve released new tools for mocking interactions with Holochain for developers to test their complex apps. We’ve managed to eliminate all dependencies on links from Deepkey’s validation code to optimise it for completely deterministic results.

We’re revamping our data query cascade to take advantage of the SQLite’s indexing abilities as we integrate it more deeply into Holochain’s core.

In Holo dev news , we finished adding new integration and unit tests for Elemental Chat last week. We further improved the signup process and added a joining code validation which will be a required field when we launch the hosted version of the app.

We have been updating our hosted happ infrastructure to work with the latest version of Holochain so that when the new Holochain proxy code lands we can quickly integrate those updates on the Holo side. Specifically we’ve recently finished updating Chaperone, Envoy, and HPOS Holochain API. We’ve also added code that will automatically install hosted holochain apps onto the HoloPort (previously this was being done manually during our dev tests).

One key issue we discovered which can disrupt HoloPort operations happens when a web user closes the browser tab during signup. We’ve implemented several changes to account for this that are in review and we’re working to complete another component before we can test end to end.

Parallel to all of this work on Holo, we’re writing resilience tests, and we’re putting the finishing touches on the UI for the next release of Host Console, which will show hosts real data usage about the Holochain apps their HoloPorts are hosting.

The team is appreciating all the energy and support from the community. Lots more to come soon.

Thanks Lucas. Seems like a lot of people have found Holo now. The word has spread. But there are still plenty still in dark as yet to come on board I do believe.

I’m looking forward to seeing the UI for the Host Console - that sounds exciting!

Well done. Keep up the good work. The best is yet to come.

Hi, holo’s market value has dropped sharply. Should I be worried as a holo Investor.?

Looking pretty phenomenally good to me, but I have no holo so I can only see it as an onlooker: 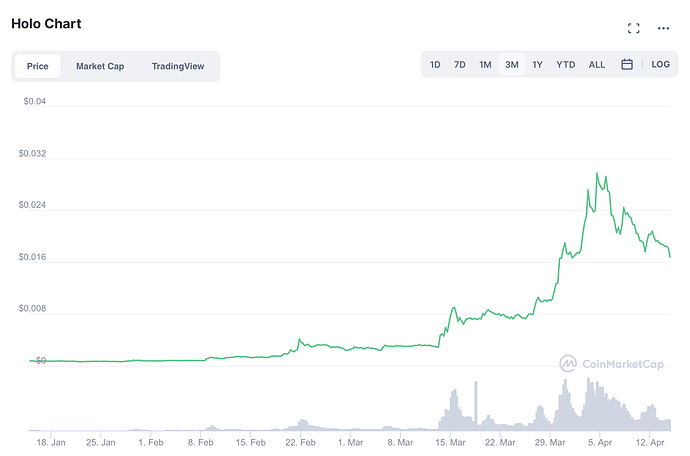 I believe there are more appropriate places for price discussions - these forums are more development-focused. Check out the Facebook group and the holo hosting forums.

Thanks for your reply.

I think the best discussion spaces for HOT price talk are on Reddit and Telegram. I think you might find more/better answers there

hello also I use very little reddit. it would be interesting to create development information on other platforms as well. I follow a lot on twitter and I see the community very active, but it would be appropriate to intensify the information on what Holochain really is, many people do not know it at all, I am not talking about advertising, but clear information on the project under construction, which for many and difficult to understand better, for the rest I think it is an ambitious and really interesting project that is why I invested in Holochain, I wish you a good job, waiting for further updates for Thursday, a greeting

Hi @mikko! Welcome! This forum is a great place to engage about Holochain development and the apps/projects being built on Holochain. We post all announcements here as well as twitter.

I recommend starting with resources posted in the directory category to get a better understanding of Holo, Holochain, and the ecosystem that has grown around the two projects: https://forum.holochain.org/c/welcome/directory/124

I hope that is helpful!

announcement of our patent recently

Could you please share a link for this announcement?

Thanks @Brooks! Hi @TiberiusB I’m a big fan of your work with Sensorica.