We get a lot of feedback from the wider community. One of the most common complaints, especially from crypto hodlrs, is that we do not do enough marketing. 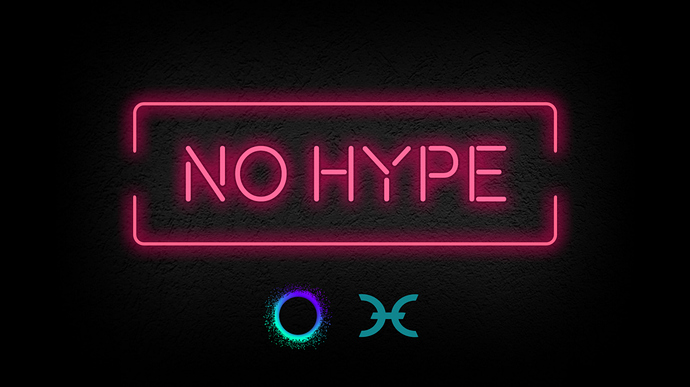 Brilliant response, badly needed, bravo Mary Camacho. It might not be enough though. From my point of view, Holo project has become something with three very different public faces:

To each a very different crowd:

Three different public faces that might need three separate outlets. I’ve got interested in Holo through the crowdfunding campaign promising decentralized hosting capabilities. I’ve then become a token holder through the ICO. I’m now being more and more attracted to Holo/ Ceptr/ Metacurrency business history, and Holochain itself, because it’s growing beautifully. I’m no coder, and will not become one, but I can dabble with code, and I read a lot about everything Holo. Kinda hooked on it now, I can see my future there. But I’m the exception. Most people attracted to one of the three faces will not slip out and widen their horizons, unless it becomes a fad, like hodling.

Question: why not put up some other web domain to keep non-coding people busy about what interest them? Because hardware techies wishing to put up some node in their home might need a place to learn more, and maybe get interested in other things Holo. And because hodlrs are not going anywhere soon, so we might as well try to educate them a bit.

Head down, get the job done. The results will speak for itself. A better future for our world in these presently bleak times, and transparent, accountable governance are far more important.

Head down, get the job done. The results will speak for itself. A better future for our world in these presently bleak times, and transparent, accountable governance are far more important.

Question: why not put up some other web domain to keep non-coding people busy about what interest them?

I’ve had so many of these conversations going round in my mind and each one I can see the link between my questions and how I can answer them so I thought I’d share:

Question: The ‘best’ tech doesn’t always win the game; holochain is the ‘best’ tech; how can we ensure it does not see a similar story? Some examples - Atari Jaguar first 64-bit games machine but lost the marketing game to PlayStation. Microsoft operating systems rule the world, technology advancement held back by proprietary licensing meaning more incentive not to innovate than to innovate. Betamax/VHS, etc.

Answer: What You See Is What You Get. Free/Libre Open Source Software empowers you to become part of it, if you want to make use of it then make it your job to see where you become part of it. For me, I start from what triggers me - so if you think there should be “some other web domain to keep non-coding people busy about what interest them?” then do it. If your first thought is “I can’t do that” then look at what you just did - for me to know that you made a forum post, that means you can make another forum post about creating another domain and you take it from there. If you don’t know how to buy a domain name, ask. And so on. This goes back to the old saying about being the change you want to see in the world however I’ve heard far more people quote it than actually do it. Me included

I personally feel I want to see a world powered by technology such as Holochain, and as Holochain is the only technology currently that I know that does this then I am doing what I can to try leaning into the things that trigger me about it and seeing which ones make me feel in flow if any, and which ones don’t. Downstream vs upstream. ATEOTD we only ever have this ‘now’ moment, sure we have seen what has happened in the past but there is absolutely no guarantee that this will happen again, and less likely to if you actually do something about it yourself more than just typing into a forum post like I am right now. It’s so hard to type these replies without ending up in recursive algorithms

for me to know that you made a forum post, that means you can make another forum post about creating another domain and you take it from there.

Well, I did purchase a domain and put up a forum on it. And I’ve let it rest a bit. As a non-coding person, I’m feeling (a bit) out of place here. Intimidated at the very least. Maybe a fan forum would be a better place for the silly non-engineer type that I am … https://holochan.com/forum/public/

That link didn’t work for me, will have a proper look when I get back from the gym later and have my glasses on!

There are lots of categories for non tech conversations in this forum too.

Again I have many similar thoughts but again, Holo is not my company, holochain is not my project, so I just do what I can where I want something to move a bit closer to the vision I see in my mind, realising that it may not be the same as others have, however when I do get traction after some action creates attraction then I realise the effort has been worth it even though I may not see it at the time and nobody else did either.

Sorry I haven’t got any more positive advice, am just a fellow traveler on this journey through the youniverse

You misunderstand investors from what I can see. Nobody wants marketing over night over an incomplete project. This has nothing to do with marketing at all. Hear me out on this: all you need to do is post SIGNIFICANT twitter updates from time to time so we (the investors) can know the status of the project; tracking progress and updates, smart contracts etc. Transparency basically. We don’t ask for the impossible, right? We realize what it means to hire the right people for the right job and how long it takes to build something from the ground up. Of course investors will shift their attention away when they see other projects actually talking and updating their community over their progress, smart contracts and collaboration with different companies. Again: this isn’t about a juicy news article, it’s about lack of transparency. Nobody wants you to pay media or celebrities to talk about Holo. This isn’t Doge coin. I see Holo as a serious project next to Ethereum, Cardano, VeChain, Solana, Elrond and others but an ambitious project needs solid updates and transparency, it’s simple.

Do you… follow the Holo and Holochain twitter accounts? Because you are talking about it as if they don’t post things all the time, which they do. There are regular blog posts, videos, and all sorts of updates, quite regularly. I’m sorry but I can only laugh and shake my head at this comment.

I agree, plenty of updates. I think most people only follow Holo on Twitter and are missing a lot of updates on Holochain, since they are separate Twitter accounts. But, could be wrong about this…