I imagine it would be quite fascinating and entertaining to have knowledgeable Holochain staff tell us about their understanding of the Internet Computer project from DFINITY Foundation.

I’ve got to know about the project looking at HOT standings this morning. Looks like they managed to get their new token climb directly to coinmarketcap’s top ten literally overnight.

At launch, the Internet Computer is supported by 48 independent data centers throughout the world, which between them run 1,300 nodes. It aims to expand to 123 data centers and 4,300 nodes by the end of the year, and many more after that.

I read independent data centers, as in data centers for hire not actually directly owned by big players. Big deal. Wild guess: maybe they could play some role into Holo’s plan to proxy out from Holochain…

That would be a great if we learn how Holochain staff think about Internet Computer.

I’ve read an explanation of Dfinity from here: https://messari.io/article/an-introduction-to-dfinity-and-the-internet-computer?utm_source=newsletter&utm_medium=top&utm_campaign=dfinity-ic-primer

In the article, I noticed that their price for hosting will be more expensive than AWS:

Therefore, even though canister memory on the IC might be relatively expensive at $5 per GB per annum, the framework ensures the efficient application of that memory. This is relatively cheap if we compare it to other blockchains.

I really wonder what will be the hosting prices on Holo but it’s up to the people who provide hosting services since they will set the price.

I really wonder what will be the hosting prices on Holo but it’s up to the people who provide hosting services since they will set the price.

After everything I’ve read and watched about Holo and the Holochain, it should be much less. But then, I don’t know either. Another thing to consider: price for storage vs bandwidth usage, if any rate for that. Bandwidth should only be a matter of isp2isp, as in p2p, right? But what will happen if/when an app becomes hugely popular and pump too much? Yeah, you just get more hosts serving your app, but these are many potential bottlenecks to think about prior to launch.

The way I see it, there should be an insurance policy in place, a way for Holochain to manage a CDN/Cloudflare like service for all and by all, something like a percentage of each hosting resource to be commonly allocated, just in case. Then, I’m sure they already had that in mind.

Hey folks. I’ve been meaning to chime in for a while now, but I’ve been up to my ears in alligators (still am, but whatever

) I think DFINITY is a really interesting project. IMO they get a lot of things right (which might be my biased way of saying there’s a lot of similarities to Holo hosting

) I don’t know enough about how DFINITY works yet, but from what I see, they start from some really good first principles.

I think DFINITY will appeal to people who are used to the traditional cloud but want to enjoy easy elastic scaling, avoid vendor (and platform) lock-in, centralised failure points, hardening their system, etc. Their design (in particular their Motoko programming language) makes it easy to reason about program state without having to think about programming for distributed systems.

Ease of deployment, scaling, security, and management are worth paying extra for. Amazon knows this too – people pay big money for their managed services.

Not having actually programmed an app for DFINITY, I don’t know what it’s like. But I suspect that it’ll force us to up our game in terms of developer friendliness. I don’t see it as a very big engineering challenge to match their core developer-friendliness selling point, orthogonal persistence (tl;dr: no messing around with databases; just write values to memory variables and the system takes care of storage). I also have misgivings about orthogonal persistence – it’s a pretty heavy abstraction, and you need to have a good idea what you’re doing in order to avoid memory bloat.

Lest you think I’m a DFINITY fanboi, there are still things that make me love Holochain more:

Thanks for this detailed answer. It provided me an initial view on Dfinity.

I have two questions.

I have tried developing on IC as well as on Holochain. And yes, in terms of developer friendliness, Holochain needs to up its game to keep up with the competition.

But, I don’t think "keeping up with the competition"should be the intention. Rather than competing head to head with regular blockchain, IC or regular centralised solutions (AWS etc), Holochain should continue to signal how it is different. Holochain does not solve the old problems (hosting for instance) in new ways - but enables a whole new range of problems to be solved.

Dfinity/IC is building a super complicated machine. A distributed and decentralised machine yes (to be), but still a machine that requires global coordination. That always mean a large degree of centralisation and single points o failure.

What happens to a global blockchain when future conflicts around internet traffic means many countries are mostly cut off from the rest of the net?

Here is a demo app I built for the IC: 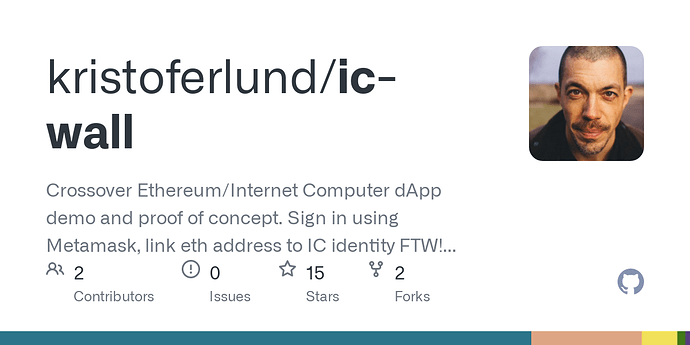 Holochain should continue to signal how it is different. Holochain does not solve the old problems (hosting for instance) in new ways - but enables a whole new range of problems to be solved.

Posting because I just wanted to see this repeated.

We want the same Holochain/smart-contract connector for our future app.

Yeah, a similar setup could be achieved with Holochain and Holo. The neat thing with IC was that I was able to use the cryptography functions in Metamask / ETH to generate new user accounts for IC. Not sure if Holo will support that.

It does not support anything smart contract related. The connector can be made from Holochain to another blockchain’s smart contract, but not reverse, from a smartcontract connect to Holochain, I right? Because I’m not so advised in it.