Where can I find source code that explains node-to-node messaging?

I’m trying to make nodes communicate privately in the background.
I found send function, but I have some ambiguity in the implementation and need answers for these questions :

Here’s a bit of info…
https://developer.holochain.org/api/v0.0.32-alpha2/hdk/api/fn.send

The ‘api’ section of the docs, relating to the HDK itself, will have better details on usage

Yeh the explanation in API is much better.

Thank you so much @Connoropolous

Do you have any idea about traits : and its usage?
Is it mandatory for the success of communication?

I think that’s just marking the send_message function as a hc_public function so you can call it from outside the conductor.
You will need to have the agent’s id in order to send a message to them.
Each agent can get their own address with this https://developer.holochain.org/api/v0.0.32-alpha2/hdk/api/struct.agent_address
You might want to setup an anchor that links to all the agents names and their address like an index. Alternatively you can get an agents address from the first commit in there source chain.

I think it is much clearer now.

so that’s mean I either can get the agent address by:

I’m not sure about the last one. hope you correct me if I misunderstand it.

if I want to make the receiver do some actions when receiving my message. How can I do it?

Actually, I want the agent updates some data within its own local storage according to my message.

This next question:
Thinking this through you can’t ever rely on another agent to do something on their end unless they can prove it to you some how.

I’m thinking they would need to commit an entry to prove that this has happened but it’s pretty hard to prove something is in a certain state outside of Holochain.
Can you give me a bit more of a use case?

a system that manages users’ profiles, where users gain scores according to their activity in the network. So, each user profile should be updated frequently as much as a user interacts with others.

I’m thinking to make each agent responsible for managing a group of users, compute their score based on opinions from others and do some checkings before committing data.

I think it is pretty difficult to make all agents participate in updating the same profile and its difficult to find the evaluator in case of fake scores.

I might be mis-understanding something here but could you no just make the users computer their own score and publish it to the dht so other agents can validate it.

Validating the other players would look something like you get another users score entry and then you rerun the entry through the validation rules. It if passes then you know they weren’t faking the score.

The trick here is finding an algorithm that you can run on any users entry in order to calculate the score.

Does that help or have I missed something?

The idea is each node acts as a master node for a group of people. So, the master node is the only one who’s responsible for managing profiles of people within its zone and update their data.

Other nodes can either read data from the master or pass a new score to tell the master to update this person. 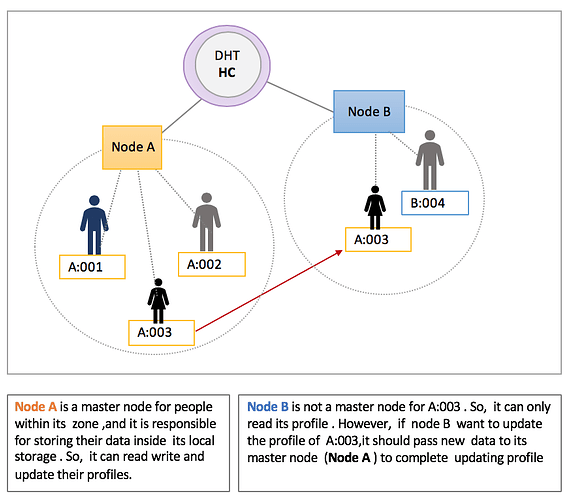 For now, my concern is how can I make Node B tells Node A to update data about A: 003
Hope it is clear now thank you @freesig and sorry for bothering you

Hey @Rzan
Don’t be sorry at all, I love these conversations. I think they are very helpful to have and for others to read.

One thing you could do is create a message type call something like UpdateUser and then when it’s received the receive zome function could match on that message type and commit the update to the person.
You would need to have something in the validation code for the commit which updates the user to check that the user does belong to the node.

You would also need to figure out some rules on how users get a master so that this is validated as well.

It’s nice of you @freesig . I’m also enjoying while discussing things in the forum. It helps me in understanding since some parts of the documentation are not completed yet. Also, this GitHub project was very helpful https://github.com/holochain/peer-chat

I notice recently my problem is in receive callback . It works only when the agent sends a message to itself. I think the reason is in the version I’m using. So, I will update it and see.

But that doesn’t address the issue of adding scores. Going back to the ‘agent-centric’ paradigm, is there a way of modelling your app such that a user’s score is always dynamically generated from the sum of all the opinion data that other users have published about them?

Here are your ontological building blocks:

Eager to see what you dream up!

Hi @pauldaoust so glad to see from you

Does a node represent a person, or is it more like a server that’s responsible for a few people?

It is actually like a server that coordinates a group of people.
To make things clear, let’s assume each node (server) represents a department of the company. So, each department will be responsible for employees’ scores within its region.

I’m trying to reduce the network overhead by making each department manager be responsible for employees under his charge ( calculate their final scores after collecting opinions from others then publish it to DHT).

is there a way of modelling your app such that a user’s score is always dynamically generated from the sum of all the opinion data that other users have published about them?

Does this bug effects in exchanging data between different nodes? Is there any update about this bug?!

Does this bug effects in exchanging data between different nodes? Is there any update about this bug?!

Right now it does affect the exchange of data between different nodes, yes. I believe they’re working on it; may already be fixed. In the meantime we’re just recommending that agents create an agent ID anchor for themselves – some sort of plain old app entry that holds a string, like their public key or the hash of their public key perhaps. Then they can use it the same way they would use their proper agent ID entry.

If the app is only meant for managers, however, then node = manager makes sense, because only managers should have user accounts.

Question: in what situations do the managers want to update information about employees in another manager’s department? Is it possible to have all that information public, in the DHT, rather than under the ownership of any one agent? That way it becomes “data we know about” rather than “data we own”. That’s the chief purpose of the DHT — to hold data in common.

Re: network overhead, I’d recommend waiting until you can collect real-world data before you optimise for this sort of thing. I understand your concern — you don’t want every single node to hammer the DHT with get requests every time it wants to calculate an employee’s score. And it sounds like that’s why you want to optimise by having managers regularly pre-calculate scores, or be in complete control of each employee’s record so they can update the score on their own source chain.

Holochain is really powerful, however, when you can find some way to use the DHT. Here are a couple helpful tips:

Anyhow, some food for thought. Let me know if I have explained anything poorly and I’ll try to find better words

If the app is only meant for managers, however, then node = manager makes sense, because only managers should have user accounts.

Yes, each manager represents a single node >> that’s what I’m working on right now. Managers need to update information about other departments in case the employee changes his department.

Tracking and Cashing are good ideas. I will consider them

Thank you @pauldaoust for your informative response.

Yes, each manager represents a single node >> that’s what I’m working on right now. Managers need to update information about other departments in case the employee changes his department.

Okay, in that case I’d let the DHT be responsible for that information rather than any one agent, as long as it’s okay for the information to be publicly visible to all managers. If Alice starts out in Bob’s department, Bob can be responsible for creating Alice’s initial record and publishing it to the DHT. After that, anyone can update it.