How is Holo hosted?

As shown in the picture below, Holo and the Reserve accounts provided by Holo are essentially the foundation of how most holochain apps will be hosted. What I want to know is how is Holo hosted? Does it utilize computing power from the hosts in the network or is it being hosted via a different method?

I very much appreciate the insight on this topic from you all! 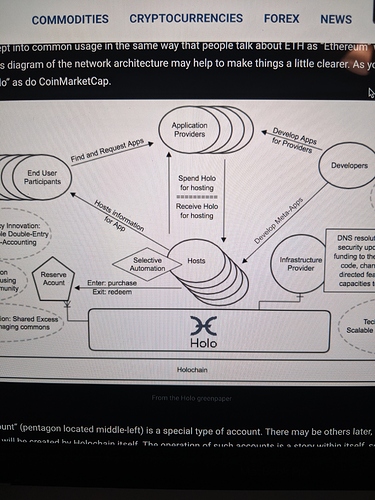 It’s a holochain app. That means it’s hosted on the devices that run the happ. Every happ creates a distributed and self hosted network.

So Utilizing the computing power from the hosts in the network is quite accurate.

HOLO itself is like any other hApps within the holochain ecosystem. So, it needs to be hosted like other hApps. How will the nodes get paid for hosting the holo-data? Is it from the transaction fees collected by the holo org or what?

So, it needs to be hosted like other hApps.

The holo hApps are self hosted like any other hApp, on the devices that run Holo. What is hosted for pay are hApps that use the hosting network.
As with any other hApp, the incentive to run the Holo hApp is to be part of the network. It’s light enough that it doesn’t need a monetary incentive.

Hosts are paid by the happ developer/provider for hosting other happs not for running the holo happs themselves.

See, if I send some holo to you, our transaction data is stored on some hosts. But they are not getting paid any incentives for this job. So, Who will be interested to host?

our transaction data is stored on some hosts

It’s mainly stored with us and a couple more, to have redundancy. It’s not that much data.

But they are not getting paid any incentives for this job

The incentive for the few KB or MB of data they store on top of their own, is that they are able to pay securely and distributed with HoloFuel. Do you need more? You pay much more if you do a transaction with bitcoin or a bank.