I have been doing some research to try and compare the current pricing for cloud computing and do a predictive price comparison for Holofuel.

I don’t know too much about hosting but from what I have researched AWS for example has 160 different price models and different packages alone so it is quite a quagmire of information.

So if anyone can answer my below questions it would be great thanks.

I have a few more but that is it for now, the main one being the charging methods and also what would be the most comparable hosting service to the AWS pricing model.

These are good questions. I think you should consider posting these to forum.holo.host as well. That is the forum for hosting.

Hi Sol, Okay thanks I will. I didn’t know there was a separate forum.

These are good questions. I think you should consider posting these to forum.holo.host as well. That is the forum for hosting.

Edit: Its only for Holoport owners so I can’t join, are you able to post it there and add replies here please or will someone be able to reply here?

Hey!!! i realise you are the famous “WorldOfHolochain” supporter on twitter!! I currently do not hold any port as well. But i am a sizeable investor and support holochain in other ways. I plan to get a holoport during/after beta. I like to see hows the ongoing progress.

Anyway i cant post on holo forum. But i can ask my friends to see if they can post on your behalf.

More like infamous with some of my musings on there.

Yes I wanted to put the money into Holofuel and wait for the software myself.

If you could ask that would be appreciated, thank you.

Yes, also make sense to try the VM. ok i ask for you.

not yet. let me ask more people. Where are you from btw? I am Singapore

Hey folks. I’m asking the HoloCentral team what their current plans are for billing. Here are some little bits in the meantime:

Hi Paul,
Thanks very much for that information.

I will go through that and do some comparisons and maybe come back with a follow-up question or 20.

Hi @WorldOfHolochain, @Sol, while you are not yet in the HoloForum I’ll bridge the conversation here for you. @pauldaoust already shared quite a bit. I’ll add some other bits and pieces I got from the team. Thanks for the heads up @dcatki!

Here is the link and a pic of the post in there: 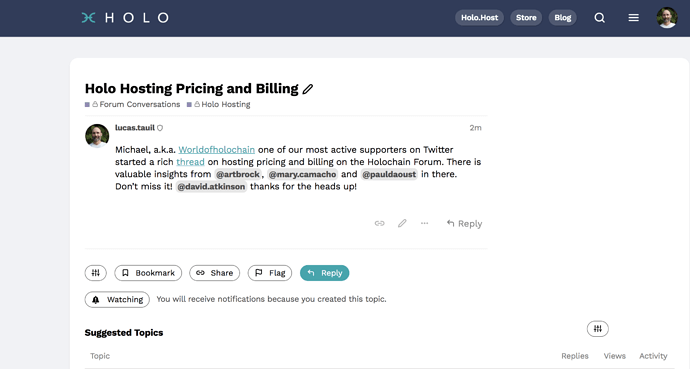 A couple of days ago @thedavidmeister asked when might we be able to host simple static sites on HoloPorts. @artbrock answered that we are probably not focussing on static asset hosting soon: “HoloCentral veered away from hosting static assets to focus on the APP side hosting. It would be nice to do both, but I’m very on board with the focus being on dynamic apps. It is, after all, one of the main differentiators from all the other crypto storage tools (IPFS, MaidSafe, Storj, Substrate, etc. etc.) and we should play to our strength in that way, or risk the message about our strength getting lost.”,s aid Art.

Hi @WorldOfHolochain, @Sol, while you are not yet in the HoloForum I’ll bridge the conversation here for you. @pauldaoust already shared quite a bit. I’ll add some other bits and pieces I got from the team.

Following the conversation above. I was sharing my understanding that I thought that early on the Holo differential is hosting distributed apps and bridging holochain apps to regular Internet users. I’m not sure whether we will compete with Amazon at all for quite awhile.

So basically there is two different price components to be worked out.

Would that be correct, or do/will they crossover somehow?

My understanding is that early on the Holo differential is hosting distributed apps and bridging holochain apps to regular Internet users. I’m not sure whether we will compete with Amazon at all for quite awhile.

Now I’m confused, if Holo is cloud computing and application hosting, how is that not competitive with Amazon?

I meant on the sense that we will initially host only distributed apps, not centralised ones.

Mary Camacho followed explaining to me that In Azure the service is equivalent to a site hosting. “The static assets are always separate as the ‘blob’ service. Also, if a solution includes many apps those may be packaged together or they may be configured for hosting separately by a publisher. In that sense, our general hApp hosting - could be reflective of many other ‘services’ that are found on cloud providers”, said Mary.

“Imagine having a bot process that runs an automated test on content that is public in the context of an app. Someone might create a bot agent that has API permissions in the DNA of a blog app to review and take certain actions within the app like notify an author, change the status from public to draft, etc. If the blog app were designed such that the authors were opting in to a set of community guidelines, this feature would be a value add… and architecturally, could be a bridged hApp running as a scheduled service. I have no idea yet if that is a best practice in the way that we are promoting architecture of hApps or if that is even the most efficient way – but it is a parallel to how those services on cloud hosting might be reflected in the near term for Holo hosting”, concluded Mary.

I meant on the sense that we will initially host only distributed apps, not centralised ones.