Getting started with a hApp

Could the tryorama error be a false holochain version? I have installed it like described in https://github.com/holochain/holochain

Mmm that’s actually not the way that the developer exercises are meant to be run. You just need to run nix-shell wherever there is a default.nix file to get a full working environment with holochain and hc installed. This is also necessary to work with multiple holochain versions.

So, no need to clone and install from the core repository, if you follow the instructions in the readme of each gym exercise you should be able to get everything you need.

I followed the setup instructions here:


…and set up the holonix command as described here:
https://developer.holochain.org/docs/install-advanced/

./run_tests didn’t work for me, didn’t find hc so I tried @wwo’s link above, which seems to me to reinstall but also looks like it might set up hc. It’s currently horribly breaking and I’ve just seen @guillemcordoba’s reply so maybe he knows why hc is not found… cos I followed the instructions

But I guess it could be MacOS specific, I do have an old X200 LibreBoot but it’s a bit loud and old and even slower than this hah.

Wait, but did you run nix-shell inside the folder 0.entries? That’s the key step, maybe we should hightlight it a lot in the READMEs.

I ran holonix which is in the advanced setup as:

If you look at my comment above you’ll see:

This is presumably saying “I’m in the nix-shell”.

to compile my code, after running it previously and coming up with lots of errors that it couldn’t find core so then I figured out I’d forgotten to run holonix and that’s when I compiled it and it all went green and I was like “omg this is AMAZING!!!”. Then I tried to run the tests and it said it couldn’t find hc.

No yeah, but actually https://holochain.love is broken. This is why we are moving towards nix files and local setups rather than relying on changing external URLs. holochain.love is still pointing to a time where hc didn’t exist.

Wait, but did you run nix-shell inside the folder 0.entries ? That’s the key step, maybe we should hightlight it a lot in the READMEs.

OK, so I think I see what you’re saying, so I dropped out of nix-shell, went into the directory, back in, same issue:

Which command did you run to enter the nix-shell inside the directory?

Ah, OK, so I didn’t know there was a difference between what I was doing typing holonix as it was in the setup guide as a shortcut to getting things up and running.

I set up holonix because in the first paragraph of the setup guide, the highlighted paragraph, it says:

So I guess I’ll try this nix-shell thing…

OK I’m just getting loads of errors now after typing nix-shell in the right directory so I’ve probably messed up my setup and will spend some time reinstalling. I’m close to putting Linux back on this mac to make life easier but I’m using it for Zoom and y’know, dual booting etc. I’ll just end up spending lots of time when I guess lots of people will be using macs and so will keep on this for the mo.
In case there’s anything recognisable I’m posting the errors below, I’ll try again after reinstalling.

I did try this exercise again now, and it is working. ( I am on linux)
These are my steps:
1- I just have installed nix-shell (Nix) 2.3.10
2- I cloned the exercise and then in this folder run nix-shell here:

4- finally you should have these errors which means, build is working and you need to finish the solution as an excercise. 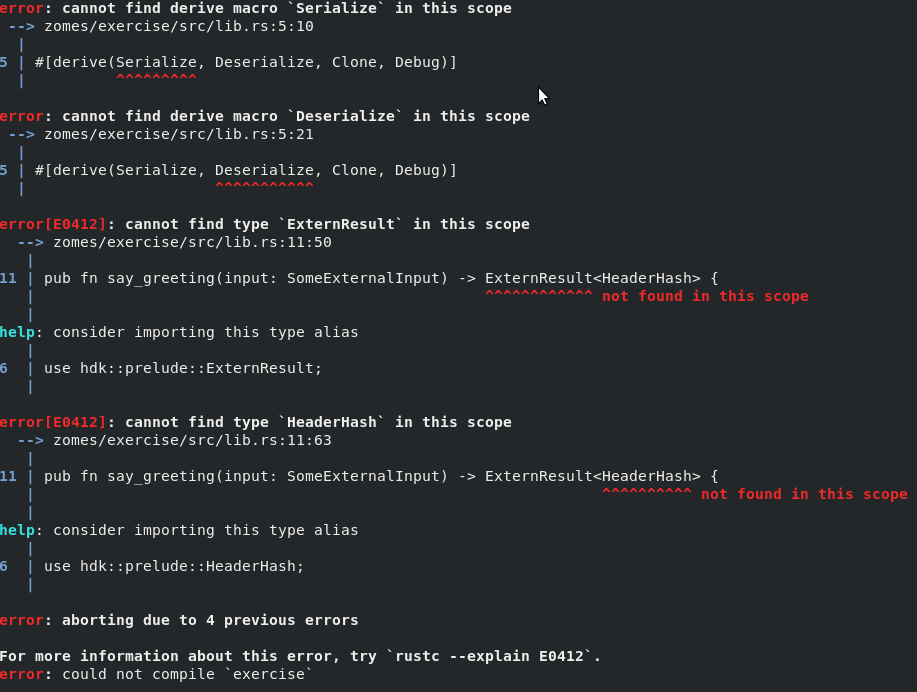 Hmmm… I just googled the first error I get:

…and got two results, one to:

which is another issue being discussed on this forum, not sure why a link to this forum didn’t turn up but here’s the link, perhaps it’s not just a problem with Big Sur then cos my laptop’s too old for it!

I’ve reinstalled nix since upgrading to Big Sur, which seems to work fine. BUT when I do either: nix-shell https://holochain.love or nix-shell https://github.com/holochain/holonix/archive/develop.tar.gz I get this interesting error: = note: ld: file not found: /System/Library/Frameworks/CoreFoundation.framework/Versions/A/CoreFoundation clang-7: error: linker command failed with exit code 1 (use -v to see invocation) error: aborting due to previous error error: build failed bu…

Thanks I will try that. Just out of curiosity how long did it take you to compile until the nix shell was started?

For the first time it takes a lot of time to run nix-shell for me. you need to be patient.

But after the first time It is very fast.

Thanks @hedayat & @guillemcordoba it now passed the test. I think it would be nice to add these steps to https://holochain-gym.github.io/developers/requirements/setup/ to make it more clear what to do for other users.

@wwo what steps did you find missing? It says how to install nix-shell on the setup instructions, and on the exercise page it says how to compile the code and run the tests. Is it because it’s not clear enough on 5. and 6. that you need to be in the directory from instruction 1.? Maybe I’ve been looking at the screen too long today but I don’t see what you missed, so it would help for clarity.

I think that sum it up

the nix-shell took about 60-80 minutes to compile.
I have installed the nix shell like mentioned here:

Hello everyone,
I am a part of the team working on a student-project to develop a hApp that @wwo mentioned in the beginning.

As @wwo already mentioned we have successfully set up our Holochain environment and we are currently trying to do the exercises of the GYM.

However we can’t seem to solve our main problem. So here’s me trying to explain it:

With the installation of the Holochain loads of folders and files get installed (I would post the holochain directory, but as this is my first post I can’t post a picture…maybe @wwo can post the picture for better understanding).

Now we had a look at these files and we are wondering where our own files - the ones containing our code of the hApp - will fit in?

This is our main problem at the moment, as we think once we have this figured out we can start coding our hApp. (Or so we believe

Does anyone know the answer to one of the questions or would anyone like to share how they made their first steps while developing their hApp?

We are immensely grateful for every answer.

Where do we create our own files so that they will be compiled and we can execute them?

Doesn’t matter! The convention is to create all zomes in a “zomes” folder.

Also how do we create the folder and files?

Zomes are just cargo projects. So if you are any bit familiar with Rust, then yeah, you create them like normal Rust files, be it via commands, or via your IDE; you add them to your module tree with the mod keyword.

Do we have to create a separate folder containing our files and if so do we have to add something to a *.toml file so that our folder will be found?

Zomes are just cargo projects. They have their own cargo.toml containing their name, author, and all that rubbish (haha!). The convention that I follow consists of having a root cargo.toml that references all the zomes while also specifying all the Holochain dependencies…

so that our folder will be found?

Found by whom? The Holochain conductor or the CLI tools don’t give a damn to where your “folders” are! All your zomes are just native Rust projects; you build them the way you build Rust projects; nobody builds them for you! All that a DNA does (meaning the DNA utils) is that they assemble (or like, “merge”) all the WASM compiles of your zomes into one pack which you call your application’s DNA. Simple! The core team has been very clever in doing things this way; neither did they have to invent extensive tooling, nor do you and I have to ask extensive questions about building/compiling here on this forum; it’s all Rust specific, meaning Rust-forums cover these concerns, not Holochain.

Anyway, @guillemcordoba didn’t respond yesterday so I thought I might give it a try! :–)
Wait for him to return…

I don’t know if anything has changed substantially; would be jumping back to programming next week anyway.

Anyway, what’s up with holochain.love @guillemcordoba? At one point I thought love was ready, but then I heard we’re back to cloning the Holochain repository and all the nix files locally?

Thank you so much for your answer @The-A-Man!
Now a lot of things make sense to us that didn’t before