Hey, any body of you having read this article By Paul Cisuano:
https://pchiusano.github.io/2013-05-22/future-of-software.html

I think this matches the philosophy of Holochain pretty well
and solves complementary problems to what Holochain solves.
It will still take quite some time till the unison language that
Paul Chiusano et al are developing is truly “production ready” though.

Enso (formerly Luna) is a second language in
the “future of coding” space that really seriously aims at practical usability.
Unfortunately enso is not content addressed as unison is.
The Enso devs are earlier than the unison lang devs with
their visual projectons of their internal code representation.
So it might give some preview?

Beside those two projects that seriously aim at practicality there
are many cool proof of concept demos of projectional languages:
Including but not limited to:
Fructure, Lamdu, Hazel, The Subtext demos, Isomorf, (odd one out: Eve), …
Here’s a linklist to some more:
https://www.reddit.com/r/nosyntax/wiki/projects 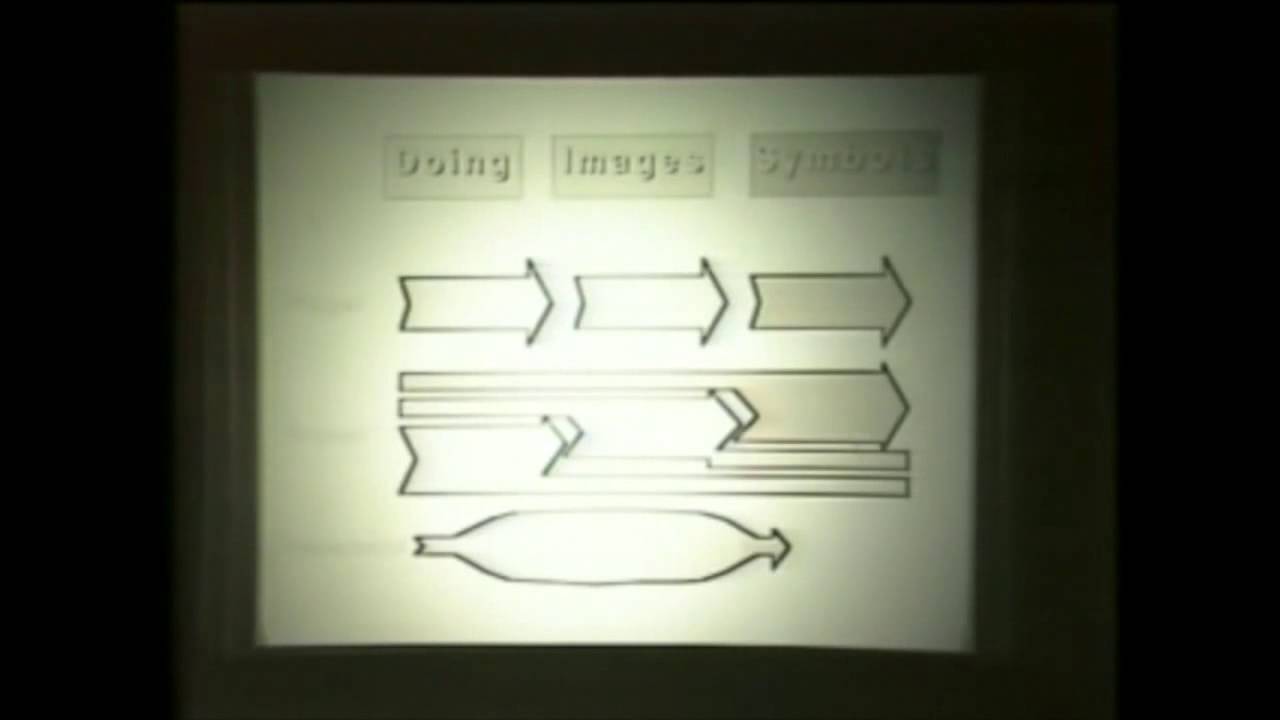 vimeo alternative https://vimeo.com/66085662
I can highly recommend watching this!
There is also the sketch-n-sketch demo in sort of this direction
http://ravichugh.github.io/sketch-n-sketch/
These higher level systems will desperately need the above mentioned
lower level projectional languages to become truely scalable.
I can’t go into details here but I am thoroughly convinced that this is the case.

Pretty much all of Conal Elliotts research work is highly relevant.
Especially including “Tangible Values” that is:
Projecting code into GUI interfaces and thereby making them truly composable: 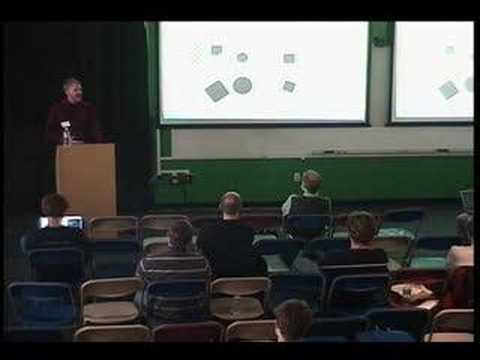 I hope such ideas can be combined with Holochain at some point in the future.
Realistically this is not any time soon though.
Holochain is already a bit ahead of its time by choosing Nix and Rust.
But what I described above is a whole nother leap. 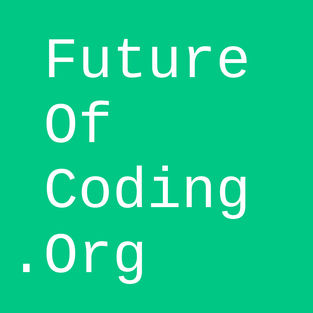 Are you looking for the real computer revolution? Join the club! Future of Coding is a podcast and community of toolmakers, researchers, and creators working together to reimagine computing.


(both of these have notable slack communities) 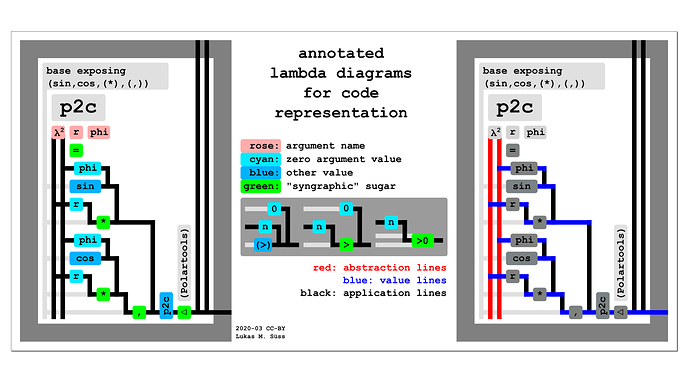 quicksort: (scroll down there) 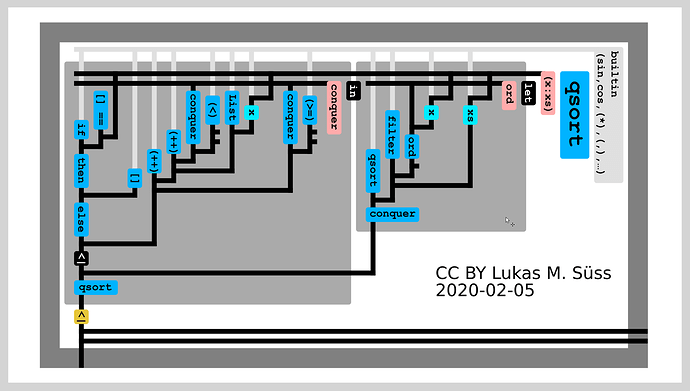 Here is a structurally more interesting example: qsort. Note: let in variable scopes are nicely visible. There's some "syngraphic sugar" here: e.g. "then" is placed as if it where the result value of "if". Rotated 90° like this it matches John Tromps Lambda Diagram orientation. 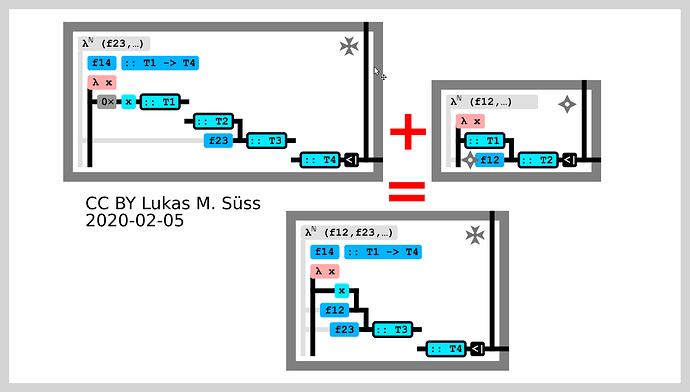 Adding typed holes to John Tromps Lambda Diagrams would make programming feel like playing a puzzle game where matching spots light up, and allow to animate program transformations as visually discontinuity-free flow of parts of the program through the program. Flow of types too.

The inverse: Drag and drop of typed holes within programs: 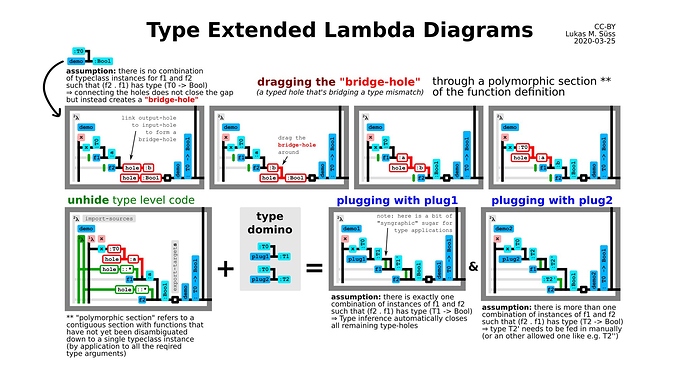 Draggable "bridge-holes" … I tried to condense into a mock-up graphic part of my intuition about how I'd desire to use typed holes in lambda diagrams. Here's a result. 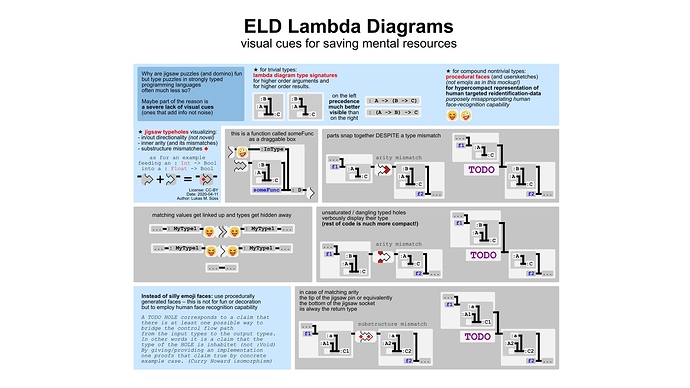 More of my thoughts on visualization of typed holes.

In place code browsing via Zooming UI: (scroll down there) 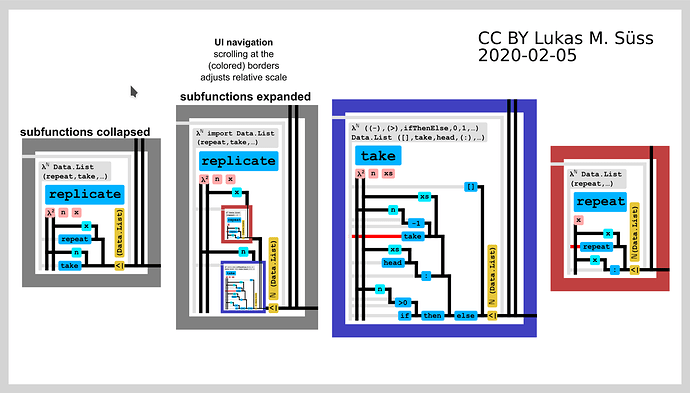 Lambda diagrams allow browsing code in an (optional) trippy zooming user interface (ZUI) like tracing a circuit. Without jumps!! When zooming out (out the code dependency DAG) then alternate supercontexts could be accessed via inverse tabs (tabs with a common cutout). 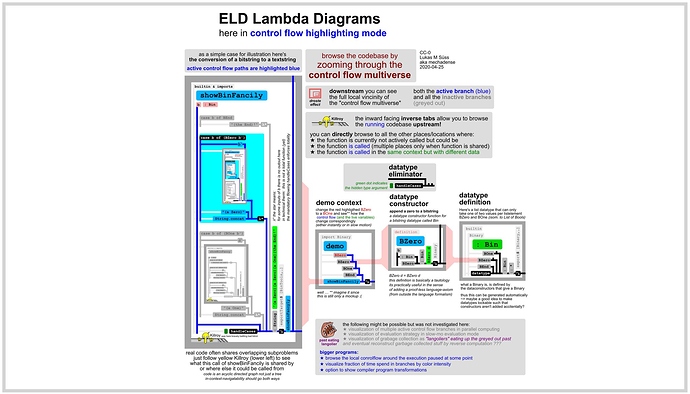 Here's another mockup for ELD Lambda Diagrams: In the context of live code execution one could see the active control flow path among all the other possible but inactive ones. A window to the whole ginormous ensemble of possible execution pathways the program could take so to say

The dreaded Monad yet again: 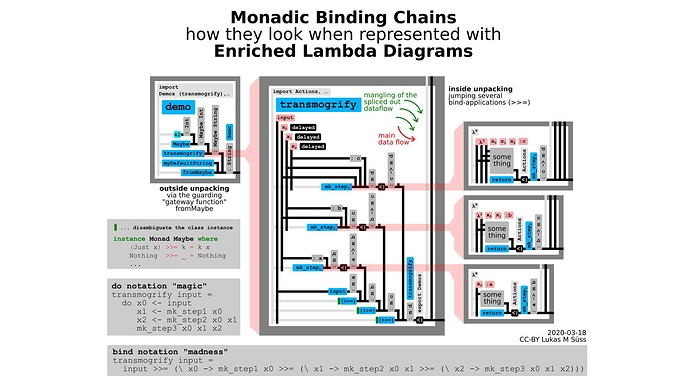 Here's yet another monad tutorial. And possibly the shortest ever. It's just one picture. Personally I find that this came out quite eludicative. Anyone spotting any serious errors here?

I call these “ELD Lambda diagrams”
and they where originally inspired by John Tromps Lambda diagrams here:
https://tromp.github.io/cl/diagrams.html
In plain form they are utterly incomprehensible but I think they become gold with annotation.
I always wanted a code reading experience that is akin to tracing the traces on circuit boards.
And lambda diagrams really seem to come closest to that.

Conventional wire and box flow diagrams conflate
“function abstraction” and “function application” together
by directly connecting outputs to inputs.
I can’t yet explain why but I have the gut feeling that this is a BAD BAD MOVE.
Like trying to calculate without having a digit for zero.
Lambda diagrams do not feature this kind of conflation.
Yet they still give a visual representation where there is
★ (almost) no need for “artistic free-form wire management” and furthermore
★ a higher on screen code density than classic visual programming
Still lower than purely textual. But on screen code density is not all what counts.

As a sidenote here are some more conventional visual code projection mockups I made too: 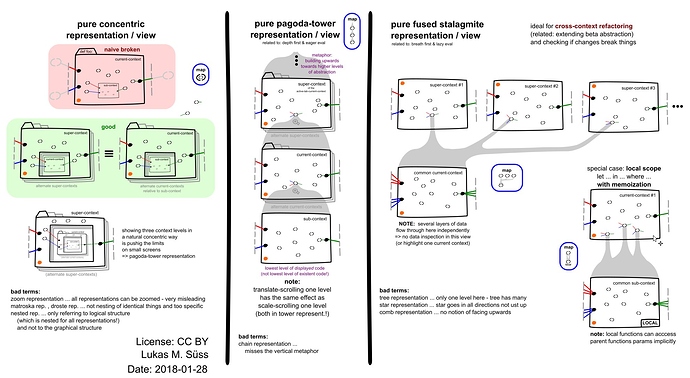 Here is the aforementioned inverse tab view (left center green). And how to go too far with it (left bottom). Again this is not specific to lambda diagrams (thus none here) but it is especially suitable for them since when they nest their "wirings" connect without spacial jumps. 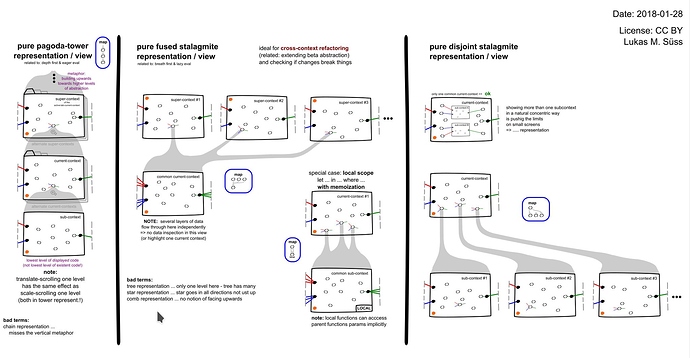 Quick direct and mentally cheap access to all the alternate usage supercontexts is essential. Faded overlay horn shaped zoom funnels diverging on the thin side can give *visible connections* in a more conventional non zoomable view. (This is not specific to lambda diagrams.)
1 Like
pqcdev February 17, 2021, 9:24am #3

if you would like to help us build: http://ceptr.org/

All hopes pinned on @philipbeadle…

I have to say:

when I saw the first demonstration about unison (this one)
It’s indeed a totally alternative approach to writing code.
Still processing what this all means… (one thought immediately popped up: could rust be developed this way?? Just thinking about how code development would look like)

Reading @lsuess thread makes me wonder if my various ideas

are actually defining a ‘programming language’. Also anyone who references Bret Victor gets my vote!

I’ve been following the CEPTR project and its sub project for a few years whilst also following Pierre Levy’s collective intelligence project IEML since 2005. Both seem to be ‘sprouting’ at the moment and with my disdain for the current ‘situation’ I’ve encapsulated my concepts in two cheap domains

(preface: before anyone moans about use of any related words in these domains, they are for community ownership, if anything ever gets built!)

This is my concept of the printing press reinvented for the holographic computing world. It uses Holochain and IEML in order to create a language. There is currently just word play of a description (because apparently a trait of “Pathological Demand Avoidance” is wordplay, along with a want for control and freedom and fantasy so hi yeah I’m apparently all that, even though this is based on my almost 40 years of computing experience, 30 in relational database, 20 in modular web apps, and 10 in entrepreneurship trying to get a “open source co-operative cafe concept” model off the ground and working. So far learning lots by failing lots and zero income lol but these times shall pass!)

Along with this I added groups for the process I’ve developed from the 22 years of delivering modular web apps to clients with projects ranging from wild crazy ideas to fairly sensible ones and everything in between. It’s a fairly simple recursive process:

I use such wonderful things like BDD in order to be able to perform calculations on user/client requirements, and IEML means you can encode in any spoken language and decode to any other. Powerful sh*t.

There’s more depth in the folder structure of the forge process at: 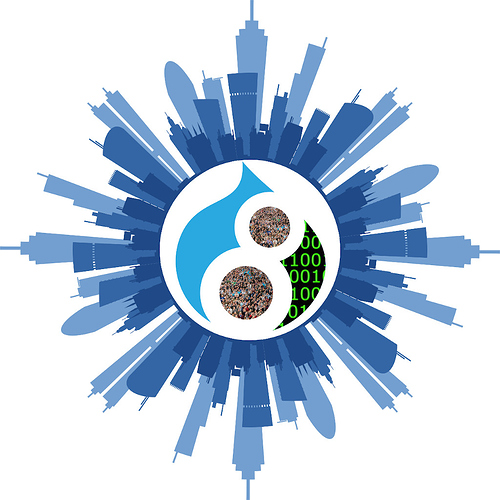 forging ahead with freedom aka forging fractal flows

I mean, it’s great but not new or exciting enough for me, it’s building on the old web, we need to focus all energy on building the new now.

So this is a recent one as I did a namecheap search for ‘holo’ one night and it came up, and with all the election stuff lately and all the cancel culture etc. I thought this could be a good “implement example” of holo.press. I discovered “ex-voto” on Wikipedia and it’s where people offer something to a saint or deity, and I discovered stupas and thought well you could cast your vote and create your virtual presence, build it up over time and it would basically be your ‘symbol’, like brands have.

A useful real world example of how this could be useful is me casting my foot size, shape, colour preferences, etc. so when I go visit my virtual wardrobe there’s only shoes that would fit me and that I would like because OMG only discovered I’m actually a size 8 wide and have been wearing 11s all my life and that is why I have so much feet trouble and have spent the last three months and hundreds of pounds just trying to navigate the different brands sizing etc. and life could be so much easier if I just built up my own stupa or whatever using holo.voto to keep voting for stuff and brands / people / etc. could use that as my interaction point cos I am so fed up of filling in my details in forms, it’s wasting my life.

Anyway on that note, there’s a short outline, if anyone has any cracking ideas on how someone who passes out if they look at code these days for longer than 5 minutes can pursue these do let me know. The passing out thing may very well be my eyesight, got an eye test booked for 6th March and will be homeless from mid-March if I don’t get my finger out soon and figure something out so gonna be interesting times

I was just about to embark on a new post in the hApps discussions to get another idea out of my head which could be a different use for ‘holo.press’ I thought I’d add here that I tend to think in the distant future - so like before we had things like Time Zones people didn’t know what life would be like after, and I feel very much like that in terms of programming languages, as maybe that’s what we all do “what would life be like if we could just think of something and it would end up manifesting without me having to write code”.

Much of the time we get lost in the “how” - “Mad how disease” is the best description of it, so for me I’m really intrigued in the “how” because that is what seems to come out of nowhere and slap us all in the butt “wow, didn’t think THAT would happen”. etc.

Why am I writing this response? Is it because I’ve decided to go back on the slow-release Elvanse (Vyvanse for state-siders) so I can get things done? Probably. But hey, it’s fun and I finally start to get all this stuff out of my head and perhaps make some mutually beneficial connections where I can help on things that hadn’t crossed my mind, cos y’know, being stuck inside my head is not always fun lol.

Here’s an article I wrote a while back when I was more a Drupal is the answer to everything fan before Holochain started picking up along with the entire world needing distributed apps more than ever: 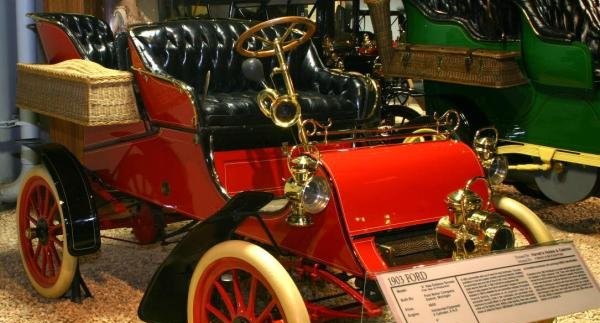 The End Of The Web CMS Brass Era?

Growing up in Essex with my father and most of my friends families working in some capacity for the Ford Motor Company, I tend to gravitate towards the automotive industry whenever I hear people saying we need to look to history in order to see the...