Are local currencies a good application of mutual credit?

@dhtnetwork @Holochain
Would local currencies fit into this profile as an ideal token or coin?

I would go out on a limb to say that local currencies are the most ideal application for mutual credit. Bernard Lietaer claims that they are resistant to inflation because they’re created in response to the exchange of actual real value. This means that the amount of units floating in a mutual credit currency system exactly matches the amount of value. There are other things that make it great for local currencies — they keep money floating around in a community rather than running away to faraway corporations, they unlock underutilised value that’s just waiting for there to be enough dollars in someone’s account, etc.

One of the functions of money is simply to measure. @mwl, creator of the LETS mutual credit currency, is fond of saying that it would be absurd to stop building a house just because we ‘ran out of inches’, because there’s no centralised issuer of inches. So why do we stop transacting when we run out of dollars? There should be room for types of money that are mere measurements of exchange, not stores of value as if they were their own thing that exists.

Thanks, @pauldaoust
On the old Holochain chat platform (Mattermost?) there was a group of us who wanted to develop a currency called “Kindness” that was based on service. That seemed rife with valuation issues unless you literally donated into the currency that you give away.
Another possible development was as a digital local currency template, that all local currencies could be loaded into. Then the local currency would certainly be valid locally, and potentially anywhere based on the local money exchange rate.
Would love to get a group going on developing either or both of these!

Rob, life is rife with valuation issues and most aren’t well handled by algorithms. So maybe templates in plural are a good idea, just nothing please proposing to be singular and/or universal.

“…valid locally, and potentially anywhere based on the local money exchange rate” will I think only have a limited relevance, and apply to a small and diminishing part of this field.

But it’s a big field with room for anything.

Oh! You’re the Rob with the radio show, right? I haven’t seen you there for ages! I missed you and your positive energy and your will to do something big with our humble tech. So glad to see you on the forum. (NB: the Mattermost is still there; it’s just that it wasn’t the best place for discussion and retrieval of really deep topics. Right now the forum is just for design/tech discussion, but I would love to see the forum being used for non-technical discussion too. We’re transitioning in stages and will never fully get rid of Mattermost, because chat is still better for other types of discussion.)

I like the idea of a general template — it could make it relatively easy for groups to start using their own currencies. Holochain makes it fairly easy to use an existing DNA as a starting point and create an entirely new private space; I reckon this feature could be used for that purpose. Really think #someoneshould create a general ‘open money’ DNA template with a few easy-to-understand, configurable params.

One of my inquiries is how ‘spaces’ should look in an interoperable ‘open money’ world. I think @mwl and @zippy were exploring this together at one point. Depending on how you look at it, the network could look like one huge field, where humans are points and the currencies/DNAs they operate in are overlapping regions in that field… something like this: 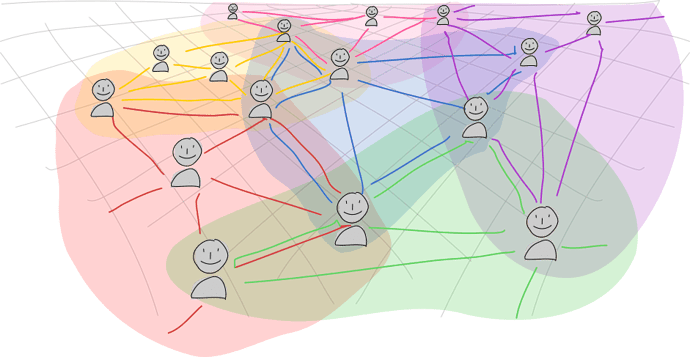 This would be fairly easy to model on Holochain; each colour could be its own DNA. This maps well to the currency spaces/symbols talked about here (@mwl I recall something with more explanation than the slides in that link; do you have a better one?). But the conversation seems to have progressed to ‘sovereign money’, which I understand as individuals issuing their own money backed by their promise to deliver value in the future. Having a hard time picturing how to overlay that on top of Holochain… all my imaginings of how it could work end up being technically possible but sorta clunky.

@mwl
Sorry that you see the development of a digital local currency template as only having “…limited relevance, and apply to a small and diminishing part of this field.” We have a fundamental difference in opinion as to what this might lead to.

As far as your request/comment “…just nothing please proposing to be singular and/or universal” for templates, I hope that what I am a part of creating has value for many, even if some choose not to adopt.

@pauldaoust
Yup, that’s me! Thanks for your kind words, I try to bring my “real world” optimism and attitude into the virtual world as much as I can. The original construct of the Kindness currency got really complicated with the idea that I see someone doing good and I give them a coin — what’s the value of the coin? Then when we started looking at the construct of local currencies, it started to make a lot more sense: what am I putting into the coin that I’m giving? IE, the credit I am extending to that person who I see being of service IS the value.

So looking at those two concepts, the idea of a template for local, digital currencies came around. Holochain is not only ideal for local use, it can also be used to exchange between locations b/c the valuation is always inherently verified at the local level. In other words, if my coin is worth $1 US, you choose what your €1 EU coin is worth in exchange. Yes, it is initially based on “sovereign money” valuation. That’s a start b/c we understand that translation. Critical mass is when you break away and exchange 1 San Francisco coin for X Tokyo coin(s) in an transaction in Stuttgart (that’s an example).

Anyway, those two possible projects developed, and I think the local currency template is a better start b/c the Kindness currency IS a local currency at its heart. The difference with Kindness is that instead of putting a coin in the cup of someone in need (which you still can, btw), you put a coin in the cup of someone who’s helping those in need in order to build their capacity to serve.

Love to connect with you and others to share details and get cracking. There are a lot of local currencies here in the US as well as around the globe that could immediately slide into using a digital version that’s trustworthy.

p.s. thanks again for remembering me in such a positive light, Paul. I feel really good about that and totally energized!

Rob, for my part I’m sorry to be reactive. It was “… that all local currencies could be loaded into” and “valid anywhere … based on the local money exchange rate” that set me off.

As for “fundamental difference in opinion on what this might lead to” - maybe so, but maybe not as you suppose (maybe). For instance I would predict that a digital currency template (such as I suppose you propose) would have very substantial value for millions, perhaps 100s of millions, and I certainly don’t have any problem with that outcome in itself. Make it so, of course.

However, the task is to create value for billions - another couple of orders of magnitude.

For this (I at least am convinced) we need to be more deeply re-thinking money, and in particular stepping well away (90 deg please) from the "my coin is worth … " money-as-stuff understandings. There be dragons like qwertyuiop (easy for me to type) and horseless carriages, and indeed “local”. Legacies can compromise.

Holochain is not only ideal for (local) sovereign money (mwl) use, it can also be used to exchange (between locations) non-locally (mwl)

For instance https://tinyurl.com/y5lmd6ek - some work in progress - and three questions / thoughts:

I’m quite sure we have the same general ends Rob - world peace etc etc - and also that our means are not in conflict. It’s just that I think there’s a bigger opportunity here than you seem to me to be yet seeing.

you put a coin in the cup of someone who’s helping those in need in order to build their capacity to serve.

this is the crucial point. We want to find ways to honour cooperation and service in a way that (a) we can afford and (b) translates to actual real benefit for the person receiving it. Bernard Lietaer paints a picture of competitive vs cooperative currencies or yin vs yang currencies (guess which category bank-debt money falls into?) and argues that only cooperative currencies are up to this task. He and a colleague studied the dual currency system in Bali and had some really good insights into how to create cooperative currencies.

I would say that mutual is the ideal template for most sorts of cooperative/yin currencies. Generic and flexible enough to apply to all sorts of situations.

(NB @mwl I noticed that Lietaer and Hallsmith didn’t cite you as the creator of LETS in the book Creating Wealth… neither does Uncle Billy in the Permaculture Designer’s Manual or Rob Hopkins in The Transition Handbook. The only one who does is Adam Brock in Change Here Now. What up with that?! Are you just hard to find, or do people have an aversion to citing you, or have you asked to be anonymous?!)