I recently learned about Alex Freeman’s awesome Octopus project. Here she is presenting it: 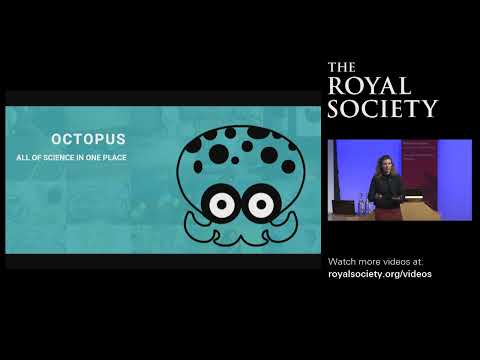 Below is part of an introductory article that answers some fundamental questions about the project:

Q: What problem are you aiming to tackle?

A: Fundamentally, I believe that the whole concept of the scientific paper drives people to tell stories rather than worry about the quality of the actual research. It’s true that during the scientific process, you usually start with a problem and you finish with a real-world use of your solutions. But the whole chain, from one end to the other, takes a whole range of different skills and different people and different amounts of time. Forcing researchers to guard their work and get to the end of the chain before they can publish anything makes people work in silos, when we’d all be much better off if everybody shared their work as they went along and everybody collaborated to get to the end of the process.

There is a real problem in science—with widespread questionable research practices, lack of replication, publication bias, inequalities in access, slow progress, and wasted resources. And I think that the root of it all is the publication system, and the pressure to publish as the only way that scientists are being judged. The new publishing platform I envisage would stop forcing researchers to try to tell a story, allowing them to concentrate on doing their work to the best of their ability and on constructively collaborating.

Q: How would this new publication system work?

A: The overall idea behind the new platform, which I called Octopus, is to break the standard unit of publication up into eight smaller stages or pieces. These include formulated scientific problems, hypotheses, methods and protocols, data, analysis, interpretation, and real-world applications. The eighth piece is reviews where people share their comments about the other stages, but it’s also treated as a publication itself because it is a constructive piece of collaboration. Researchers will be able to revisit their publications to acknowledge others’ comments or suggestions and even include some of the useful reviewers as authors, with the old version remaining available so that readers can track the evolution of ideas.

The formulated scientific problem automatically becomes the beginning of a chain, and all the other pieces are vertically linked upward. If you have a great hypothesis, you can publish that and link it straight up to the problem that it is trying to address. And if you’ve collected some small amount of data, you can publish that, linking it directly up to the protocol that you followed. It will also be possible to create horizontal links between publications; maybe somebody has come up with an amazing algorithm whilst studying starling flocking behavior and somebody else working on oil pipelines has decided to use it.

Octopus will thus allow researchers to publish in much smaller author groups, and that can make the system much more accountable and meritocratic. If, say, you’re an applied statistician, at the moment you’re very rarely a first author on anything. But with Octopus, statisticians can do analyses of anybody else’s data and get credit for it as the author of that publication. Octopus will also be made language-agnostic through automatic translation to lower language barriers and broaden access."

github: https://github.com/ScienceOctopus (this looks like the right repo, i’m not sure though)

@marcus i would be keen to understand if Omni was on a similar trajectory as Octopus, mainly what is described by Alex above:

“break[ing] the standard unit of publication up into eight smaller stages or pieces. These include formulated scientific problems, hypotheses, methods and protocols, data, analysis, interpretation, and real-world applications. The eighth piece is reviews where people share their comments about the other stages, but it’s also treated as a publication itself because it is a constructive piece of collaboration.”

note: i am aware that you mentioned wanting to take space away from Omni, so i completely understand if you do not feel called to respond. if so, no worries at all. take care