This week we’ll dive into the actual integration of a project within the modularity framework. @kamal and @oro13 from Basyn will chat with @pospi about mapping their project on to Holo-REA.

This should be a great way to understand how economic protocols like REA and ValueFlows can be useful for distributed projects. We’ll also check out the REA code and run through some of the steps involved for building a project.

A bit about Basyn:
Basyn is a hApp for coordinating inputs and outputs of a biodigester. Our prototype is located on Vashon Island, near Seattle, Washington. Basyn enables community owned, value-added utilities, through operations accounting and invoicing on a tamper-proof ledger, built on Holo-REA.

Tune in
When : Thursday, July 2 2020, 9am SGT/11am AEST/1am UTC/6pm PST (US: July 1)
Where : Zoom Room ; Calendar Invite
Who is this relevant for: anyone looking to leverage these themes. You could be a dev building in a modular fashion. Or a ‘power user’ with limited dev skills who is stitching together a community or app with basic technical tools.

Thanks, Sid.
PS: If you’d like to receive the calendar invite leave a comment below or DM me and I’ll add you to the recurring event.
PPS: More about Modularity Hackalongs here

And here’s the video. Awesome to see it all happen live 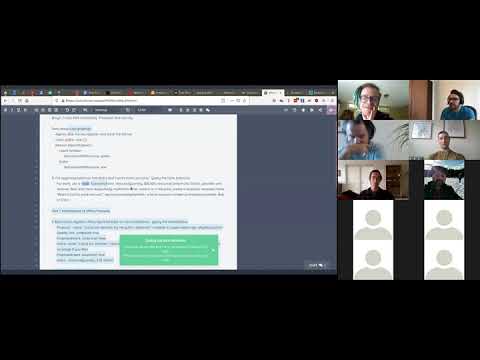 Somebody whose name I don’t remember now posed a great question.

Something like, how does Holo-REA relate to non-capitalist economic relationships? (Although they said it better…maybe they will pop in here and say it again?)

But I wanted to extend the answer a bit to point to several projects that have used REA for non-capitalist experiments.

One is Sensorica, that shares income with people who contributed in any way to a project according to a “value equation” which is public, transparent, and can be democratically decided.

The https://disco.coop/ project is picking up on that idea and calls it “contributory accounting”. They plan to use Value Flows, the vocabulary of Holo-REA.

And several projects, both in the Holochain community and elsewhere, use mutual credit, which is a non-capitalist medium of exchange that does not work like money.

The BasisProject is starting to use Value Flows and may migrate to HoloChain (they are already using Rust). Their tagline is “a decentralized and transparent set of tools to collaboratively operate a profitless economy”.

Those are some experiments. More experiments will be better. They can share ideas, and over time, figure out what works.

I also wanted to add one thing on another topic that came up. In the hackalong, we were able to start a UI that spoke to Holo-REA and didn’t need any new Rust code. So far I haven’t seen anything in Basyn that will require them to write any Rust. And a lot of economic projects will be like that.

But not all will be that way. Some will have other requirements, perhaps additional data more specific to a use case or a domain, or some non-economic pieces. Some of these could be made into small extension vocabularies if there isn’t one already out there. Sometimes, it will make sense to add on to ValueFlows. Sometimes, just add a Rust module and call it a day.

One example of such a module- here’s a proposal to augment economic resources with an ability to measure things about them, suitable for IoT devices like temperature sensors- https://github.com/holo-rea/holo-rea/issues/128

Just wanted to say: thank you for recording these. I do not wish to join these events at the moment, but watching this does allow me to follow the important work you are all doing.
Big love!