Shiro is a project aiming to enable strong local networks of individuals and food buyers clubs to form more easily. Some of the project goals are:

A few weeks back I made a prototype on coda.io, trying out a flow allowing buyers club to do bulk ordering. @ViktorZaunders translated the prototype to English and posted the following short walkthrough. 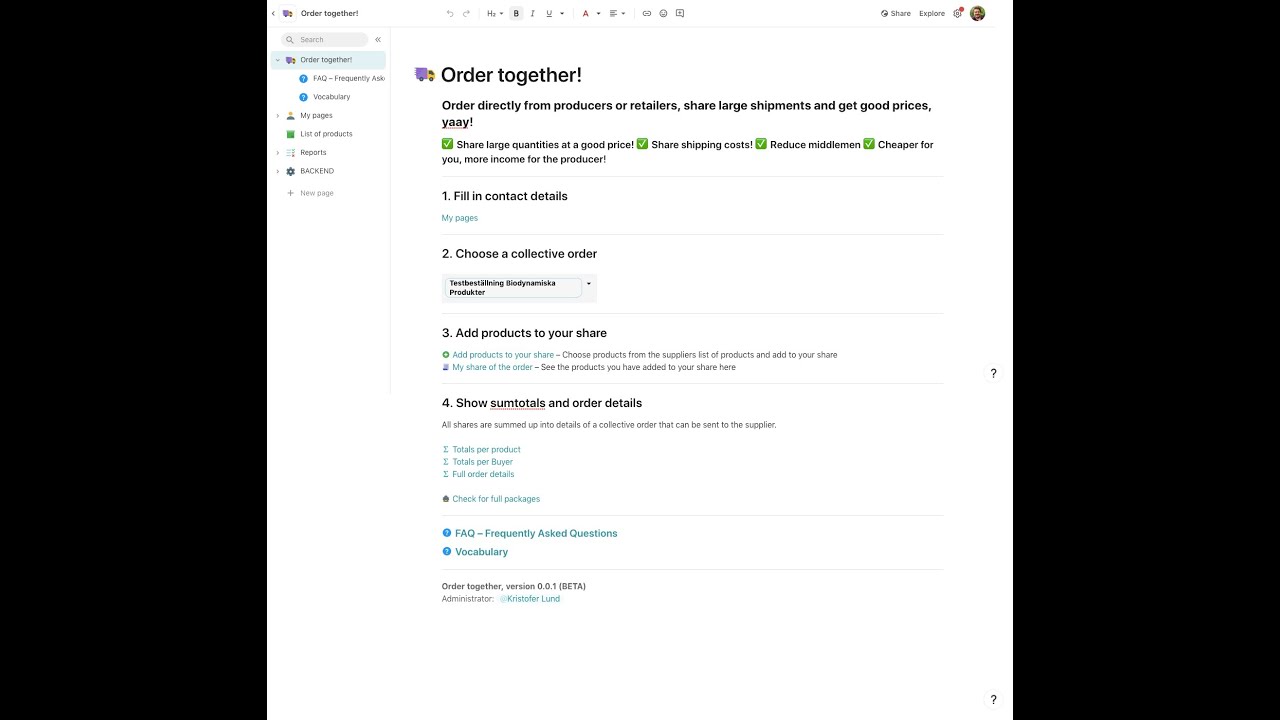 Now, together with @lynnfoster (and possibly @bhaugen andor @pospi ?) we’ll do a mapping session looking at how a flow like this can be mapped onto HoloREA.

Join the discussion on Saturday!

@th1j5 This is the group I was referring to during the DevCamp breakout!

Reminder, this session is happening. In 25 mins ca. Welcome anyone interested in how REA and Holochain could be used to facilitate the emergence of strong local food networks and flows of goods and services.

Really looking forward to the recording!

Fun to hear that you want to see it @pospi, a lot of it was clarification on how what we’ve been prototyping maps on to ValueFlows.

The recording is stuck on a computer I won’t reach until wednesday though, but after that I can get it to ya!

Yeah, we had a good runthrough of some of the core REA classes in relation to the prototype I made, thanks @lynnfoster! It turned out most of our needs can be met using Intents, Proposals and Resource Specifications. The majority of the implementation would be quite straight forward, but as always, the devil is in the details.

We also talked about the larger issues of how to facilitate interoperability between REA based apps. How much of the app data would live in a common HoloREA DNA and how much live outside the “common database” in an app specific DNA.

How would the actual canvas look where the interoperability happens? How does the fertilizer output of the Basyn biodigester gets routed to become an input or maybe a sellable item in a cooperatively run store powered by Shiro?

Branching from what we actually discussed now…

NH apps would have to include this bundling as part of their build process in order to offer UI elements to other apps.

Yes! Apps being able to render representations of their data in an unknown context would be key to facilitate interoperability in the UI. After using coda.io a bit now, I’m a big believer in the “text document” as a base canvas for building custom apps built on standardised components from different providers. Rather than something more dashboard like / control panel like.

After using coda.io a bit now, I’m a big believer in the “text document” as a base canvas for building custom apps built on standardised components from different providers. Rather than something more dashboard like / control panel like.

@kristofer this is really interesting for where a lot of people want to go. And I’ve been thinking something like “personal dashboard”, so I look forward to where you go with this as an alternative. Please keep us all in the loop!